Jude and I met in college and started dating almost eleven years ago. The first time we went out alone together we ended up talking all night and then Jude made me a big breakfast of waffles in the morning. He cooked for me before he ever even kissed me!

Over the years together, many things in our relationship have revolved around food and travel. Jude had always been passionate about flavors, but hadn't seriously considered making a career out of it until a few years ago. In college, he had studied film and worked in the industry as a camera guy for years before deciding to go to culinary school in New York. I was a middle school teacher in Los Angeles while Jude was working in the t.v. and film industry and have now worked for an education nonprofit in NYC for the past four years. Jude graduated from culinary school in 2006 and works full time as a sous chef at a restaurant here now.

We got married in July 2007 and had our first child, Ruby, exactly two years and one day later. In a world where people regularly eat "food" from boxes and pick up nasty crap from drive-through windows, we feel an intense responsibility to set a good example for Ruby by showing her the importance of eating real, whole foods and the social interactions involved in eating well. 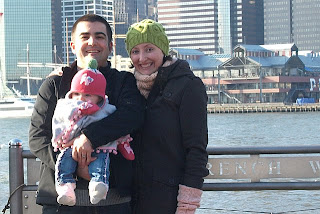