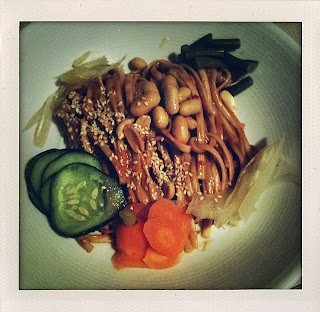 We've been eating out a lot with our guests in town, but for our last dinner together, Jude made chilled sesame peanut noodles with pickled veggies. This is one of my favorites, but I realized that I haven't had it since the night that I went into labor with Ruby (her last meal in utero) over seven months ago! Jude thought to make it now because my brother's girlfriend, Melanie, is vegan and this is 100 percent non-animal. Jude just eyeballs the sauce and makes it to taste each time. It involves peanut butter, soy sauce, grated ginger, garlic, rice wine vinegar, sugar, chili garlic sauce, sesame oil, and sesame paste. He cooks the rice noodles and then tosses them in rice wine vinegar before dressing each serving individually with the peanut sauce. To finish, he garnishes each plate with a bunch of veggies he pickled himself (celery, cucumber, green beans, carrots, and fennel), sesame seeds, and whole peanuts. Yum! 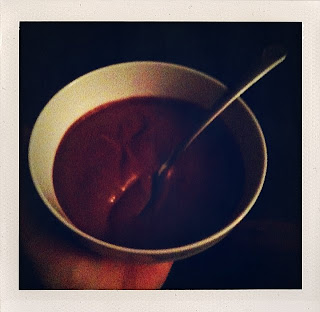 Another of my pregnancy favorites: Mexican chocolate pudding made with silken tofu (you'd never know it!). We got the recipe last spring from Mark Bittman in The New York Times and I was completely addicted. Tonight, I made the pudding (desserts are often my domain)--it is super simple, so not much room for me to screw it up! We were out of cinnamon and I went a little light on the chili powder, so it didn't have its usual kick to it, but it was still chocolately and delicious. We use good dark chocolate (not cheap milk chocolate chips) pieces (which also end up being vegan since there are no "fillers" like milk fat to produce it cheaper) and it is heavenly.
Posted by Milk Mama at Monday, February 15, 2010