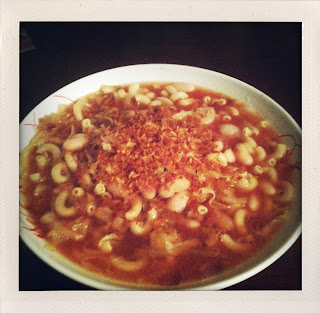 Jude created tonight's dinner with the intention of using up a bunch of random odds and ends we had in the kitchen: cabbage we had bought for tacos last week, proscuitto from our picnic dinner, cannelloni beans, macaroni noodles, and breadcrumbs.

I don't usually venture into the kitchen while Jude is cooking, but tonight I snapped some pictures while he was hard at work. He had started soaking the beans in water on Saturday and cooked them yesterday with water, garlic, thyme, bacon, and an onion. Tonight, he "sweated out" (which means he cooked it lightly in some olive oil) some onions and bits of proscuitto in a pan, then added shredded cabbage and dumped in a dark beer to steam and wilt the cabbage a bit. Once the beer cooked off, he added chicken stock and some tomato paste and cooked it until the cabbage became soft. 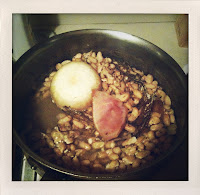 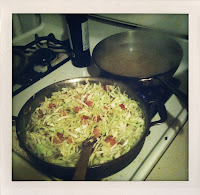 He cooked up some macaroni noodles and used another pan to toast the breadcrumbs in olive oil. 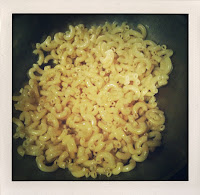 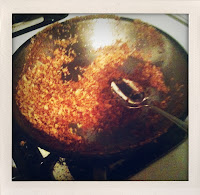 Jude used a little pot to put together each serving of soup separately before plating it. He does it this way so that he can control how much of each of the parts of the soup we get in our bowls, and also so that we can keep all of our leftovers separated so the noodles don't get mushy. 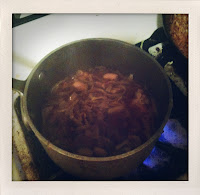