It was about that time...to use up the leftovers from the week. We had tacos one night and steak another, plus we've been munching on chips and salsa. So Jude made a dinner tonight of a big hearty salad that used up our leftovers. Jude told me not to take a picture of it because he called it "trashy," but this salad was so delicious, I don't care if it was just a bunch of leftovers in a bowl!

He started with black beans and the red onions he pickled earlier this week. Then he cooked the leftover skirt steak from Monday night with a little char on the outside. Put that and mixed greens over the beans and onions and then--on a whim (and I think this is where he decided his creation was "trashy")--sprinkled crushed up corn tortilla chips over the top. I've gotta say, I was skeptical of the chip idea, but it was crunchy and so delicious! 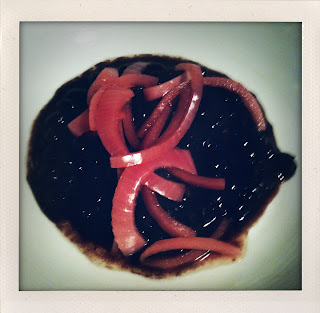 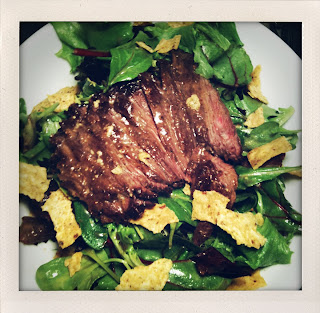